There is a great variety of outdoor activities in the area.

The region is famed for its hunting clubs.

Limerick Race Course at Patrickwell offers a combination of day and evening meetings as does Limerick junction in Tipperary. 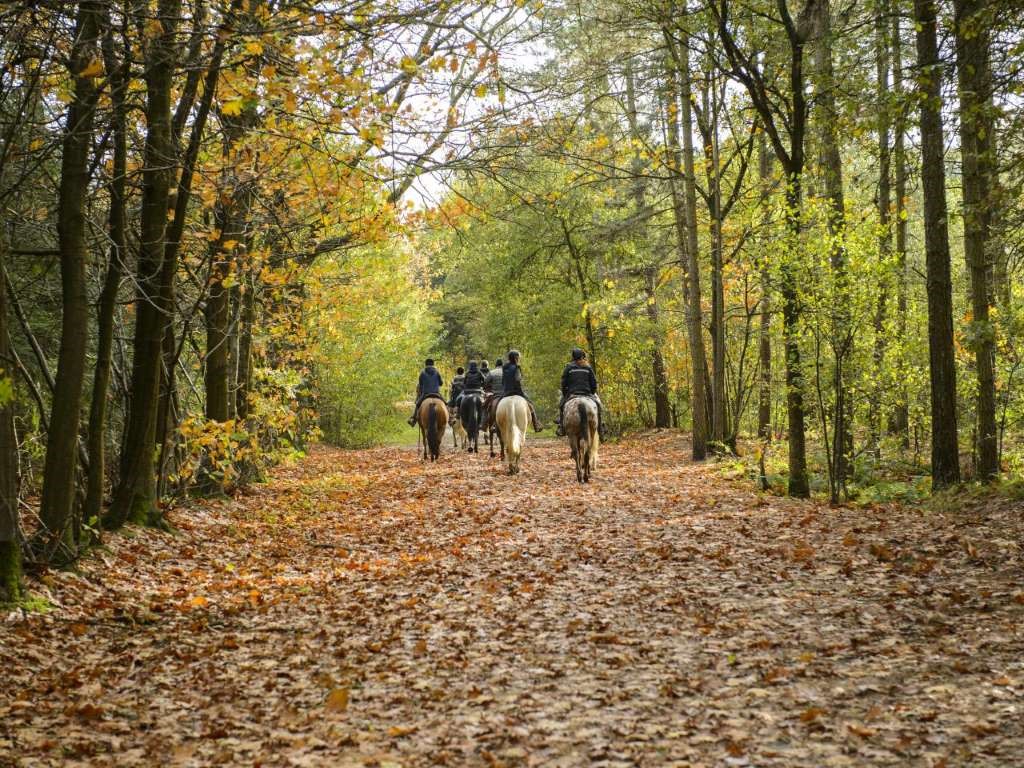 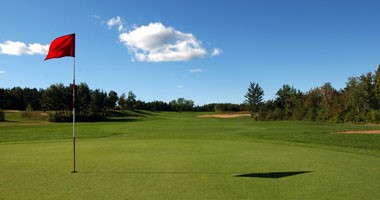 The house is a golfers paradise, with a number of of highly recommended golf course within close distances.

Lazy Dog Ltd. is a clay bird and indoor rifle range centre located in the Ballintubber, Kilfinanne, Co Limerick and is a perfect way to be introduced to the sport. The centre offers a variety of shooting layouts catering for novice shooter and the very advanced. A qualified shooter is available for tuition, covering everything from safety to gun handling.

UL Sport Climbing Wall is an all-new state-of-the-art climbing wall currently located next to the University of Limerick Sports Arena. It is the latest addition to the already impressive range of sports facilities at the university. The design offers a unique 360 degrees of walled climbing, somewhat resembling a gorge or cave, creating an almost enclosed feeling. The wall incorporates all elements of traditional indoor climbing up to an Olympic standard, while also including a non-traditional SRT ledge (a facility for cave training) and an 18m section making it, at the time of writing, the tallest indoor climbing wall in Ireland. It features: Total walled climbing: 708 m² Main wall: 484 m² Boulder wall: 126 m² SRT ledge: 87 m² Moon board: 11 m² Speed wall Three auto-belays. 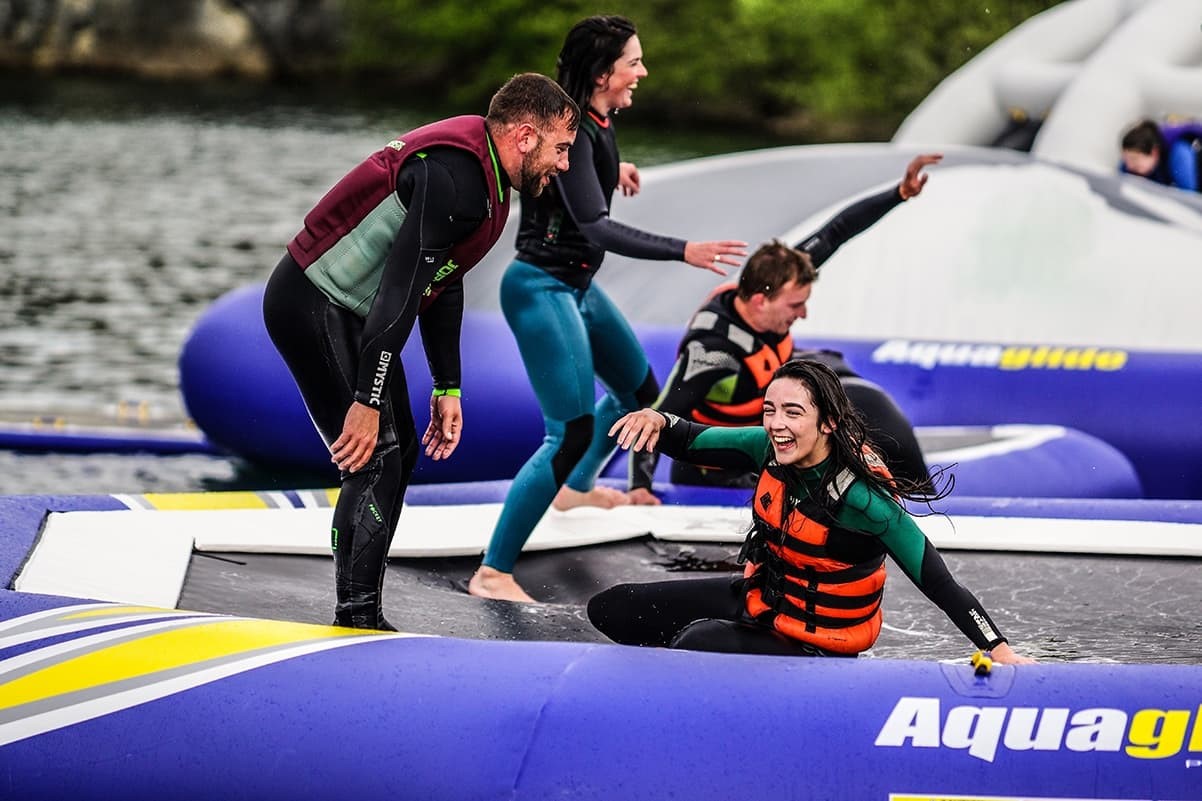 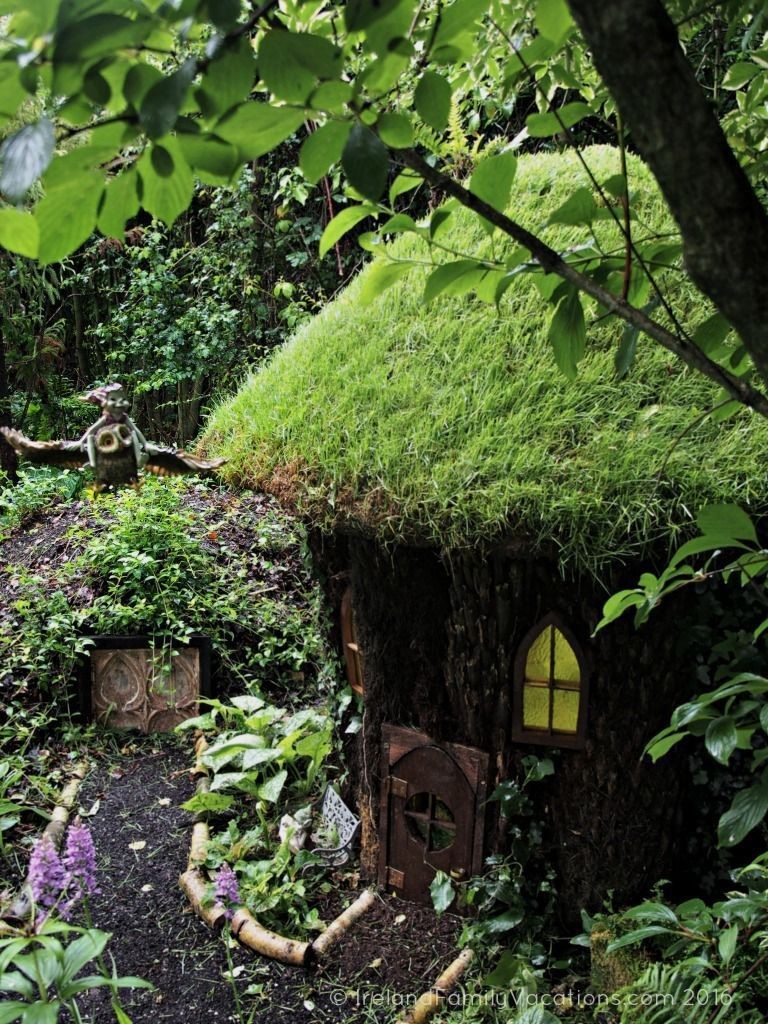 Terra Nova is one of Ireland's best known small, privately owned gardens and is a firm favourite with garden visitors of all ages. A half-acre that appears so much larger due to the use of weaving pathways, imaginative features and an ingenious use of space, nothing goes to waste here in this lush oasis, though it is without doubt, a plant lovers garden, it offers so much more. Terra Nova’s magical fairy experience begins once you enter and there’s plenty of Fairy magic here and many can feel it. Some find it uplifting, others find it calming and some have even been moved to tears! This garden has a soul, it can't be explained, it has to be experienced. A happy garden that will make you smile - come and see and feel it for yourself.

Terra Nova Fairy Gifts is Ireland's leading fairy gift shop and stocks the largest range of fairy houses, doors and fairy garden accessories in the country which are also incorporated in the garden to make this garden visit truly fairy magical.
Coolwater Garden a wonderfully, artistically designed garden on half an acre, steps to the beat of a different drum with its breathtaking Water Garden, numerous alpine troughs crammed with choice specimens and a chimerical West Garden.
Rockbarton Garden Centre is set in an historic and beautiful 18th Century courtyard at Holycross, Bruff, Co. Limerick and is a family run business by Lynda & Bryan Sheehan, along with their children.They run a variety of lifestyle and wellness gardening themed events and classes.Some of the events that they host include annual Easter Egg Hunt, Christmas Boutique Fair and seasonal Christmas Wreath Workshops. Throughout the growing season children’s gardening classes are on going which are inspired by her own family learning to grow some of their own food. 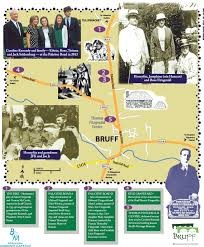 The De Valera Museum and Bruree Heritage Centre is dedicated to Eamon de Valera [1882-1975], first president of Ireland and one of the country’s most famous statesmen, it houses a unique collection of personal belongings of this historic figure, as well as a wide range of articles which record life in Bruree in the early 20th century. This visitor centre is located where Eamonn de Valera grew up. The cottage in which he lived is now preserved and the national school he attended houses a museum dedicated to his memory. The Heritage Centre uses audio visuals, graphic panels, set pieces and displays of personal memorabilia to tell the story of the village’s greatest son and of the area which is credited with forming his character.
Currently only open by private appointment. 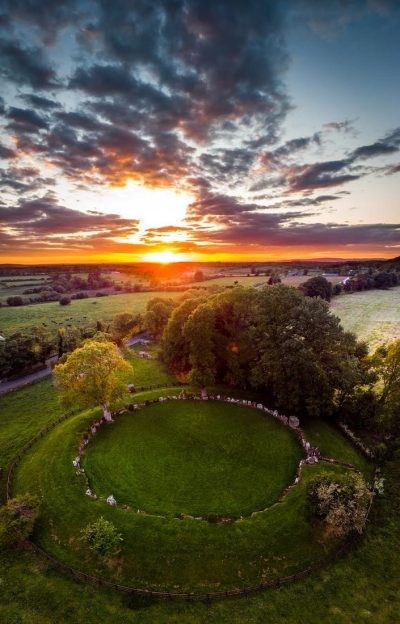 Lough Gur is to the the north of Bruff, a horseshoe-shaped lake bounded on three sides by hills. Bronze Age objects found in and near the lake have made it the most important Bronze Age site in Ireland. Every major museum in the world has at least one artefact from the lake. In the 1840s and ‘50s, the archaeology of the Lough Gur area was damaged by treasure hunters and as a result, many artefacts were lost. Lough Gur is a haven for swans, ducks, and wildfowl, and has an interesting variety of wild animals. Its visitor centre is open daily from 10am to 5pm.
Grange stone circle is also known as Lios na Grainsi (Irish for "stones of the sun"). Grange is Ireland's largest stone circle, consisting of 113 stones. Built ca 2100 BC it is over 150 feet in diameter. A post hole found in the very centre of the enclosure indicates that the circle was measured out from the central point and is the reason for its near-perfect shape. It is surrounded by an earthen bank which in places id three to four feet high and makes it look more like a form of henge monument than a conventional stone circle. Aligned with the rising sun on the day of the summer solstice the sun shines directly in the centre of the circle. It is a must-see attraction when visiting Bruff.
Megalithic Art Find at the Great Grange Stone Circle, Lough Gur, County Limerick - Ken Williams, a photographer who specialises in taking photos of ancient sites such as Newgrange, discovered new megalithic art at the Great Grange Stone Circle in Lough Gur, Co Limerick on August 17th 2022. These carvings were similar to others found in passage tombs in the north and east of the country, such as at Knowth and Newgrange. 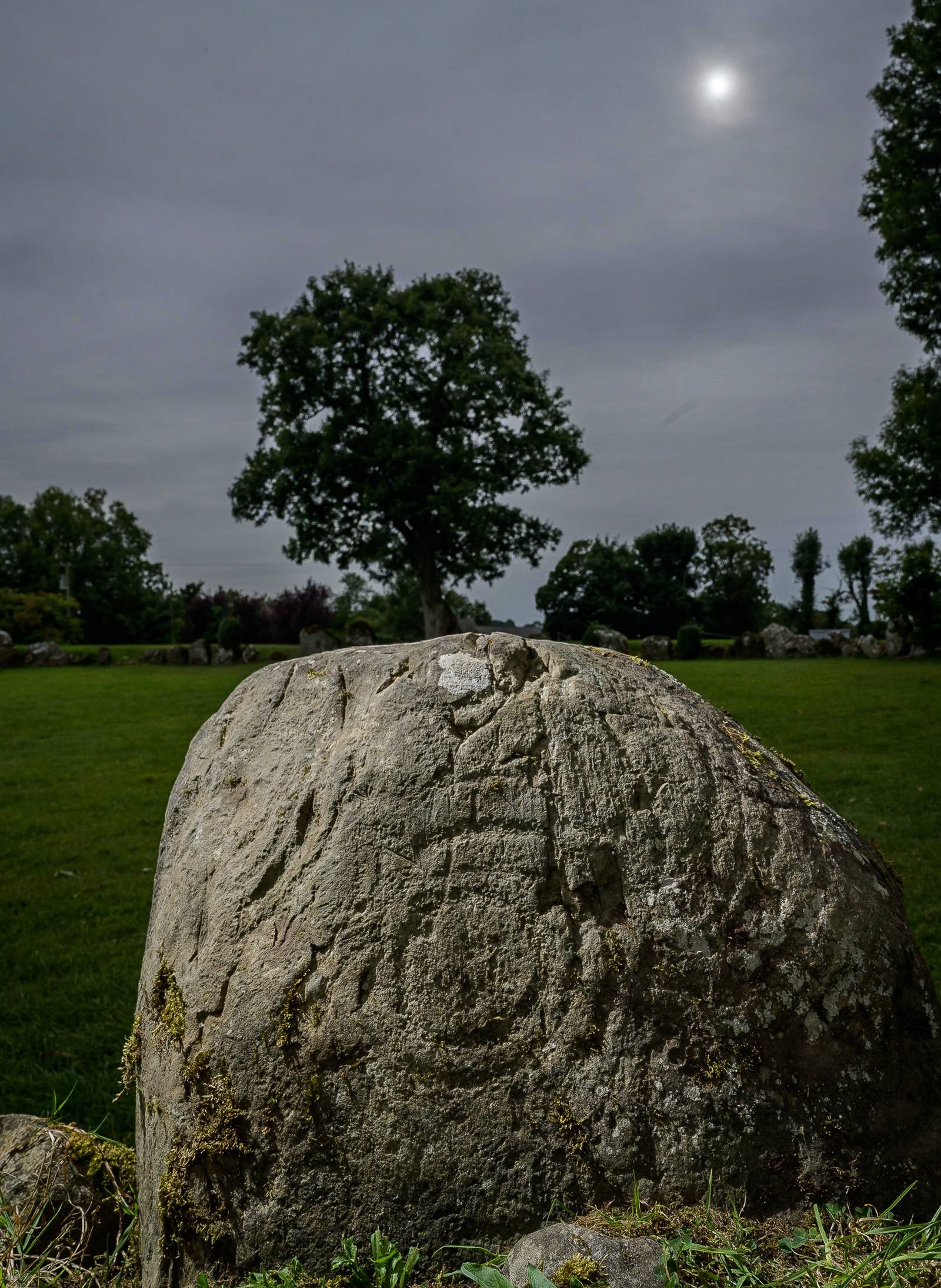 Kilmallock Medevial town fortified in 1375 with 5 impressive towers hints at the wealth of this once thriving town. Kilmallock is an important Norman town and was at the centre of Ireland’s political development from the 13th through to the 17th centuries, a history that is evident through the rich architectural heritage that is the town’s national monuments. It is an attractive town of great cultural and heritage value, deriving its name from a monastery founded there by St. Mocheallóg in the late 6th/early 7th century. The medieval town was a major centre for religion and subsequently for trade and commerce. It was also politically significant as it was a stronghold of the Earls of Desmond. This dominance is evident in the wealth of medieval buildings that survive to the present day creating a unique urban landscape. These include the 13th century Collegiate Parish Church and the Dominican Priory, over 1200m of the medieval town wall, including a town gate, the 15th century King’s Castle standing astride the main street and 16th-century houses of the wealthy town merchants. 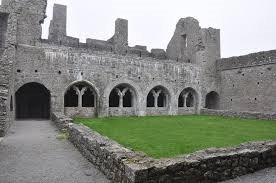 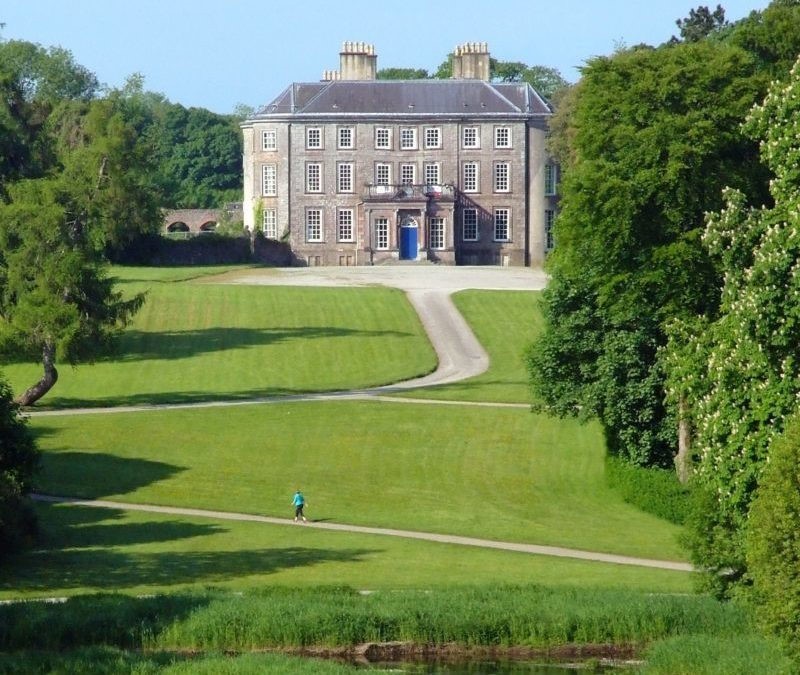 Doneraile Park comprises approximately 166 hectares and is an outstanding example of an 18th century landscaped park in the ‘Capability Brown’ style. Mature groves of deciduous trees, several restored water features and a number of deer herds can be viewed along the many pathways within the Park. The pathways are generally accessible for people with special needs. Doneraile Court, the former residence of the St. Leger family, is a stunning centrepiece of one of Ireland’s most  beautiful estates. Located on the banks of the Awbeg river in north Co. Cork, the house dates from the 1720s, when it was built by Arthur St. Leger, the first Viscount Doneraile and father of the renowned Lady Freemason. The house was modified extensively in the 19th century by later generations of St. Legers, creating the imposing and characterful building that can be enjoyed today. The kitchen wing from this period now serves as the home of the Doneraile Court tearooms and is a perfect way to start or finish your visit.