Miriam, her husband Pat and family restored this historic banking town house as a 4 star B&B.  The Old Bank B&B provides the quality and comfort found in any Four star Guest House or Hotel, but with the attentive, personalised service and value for money of a much smaller establishment.
Previously a retail manager she decided that home was where the heart was and welcomed her first guests in June 2008. Their 4 children are very much part of this family business and this sense of Family is what The Old Bank is famous for. "You don't stay with Strangers, you stay with Family" Unlike large properties, Miriam and her team take the time to ask you questions about your trip and will offer advice on restaurants and onward travel advice to ensure you have the best possible stay and trip.
Pat is a butcher and rears his own cattle for his butchers shop in Croom and you can taste his breakfast meats as part of The Old Bank fresh breakfasts each morning. Miriam's homemade breads, scones and muffins have earned them a great reputation for there breakfast. Guests can also enjoy refreshment's in the library on arrival by the open fire.
Each room at the Old Bank possesses its very own distinct individual style that blend period decoration with all of today's modern services and luxuries and this family truly enjoys restoring this banking town house. 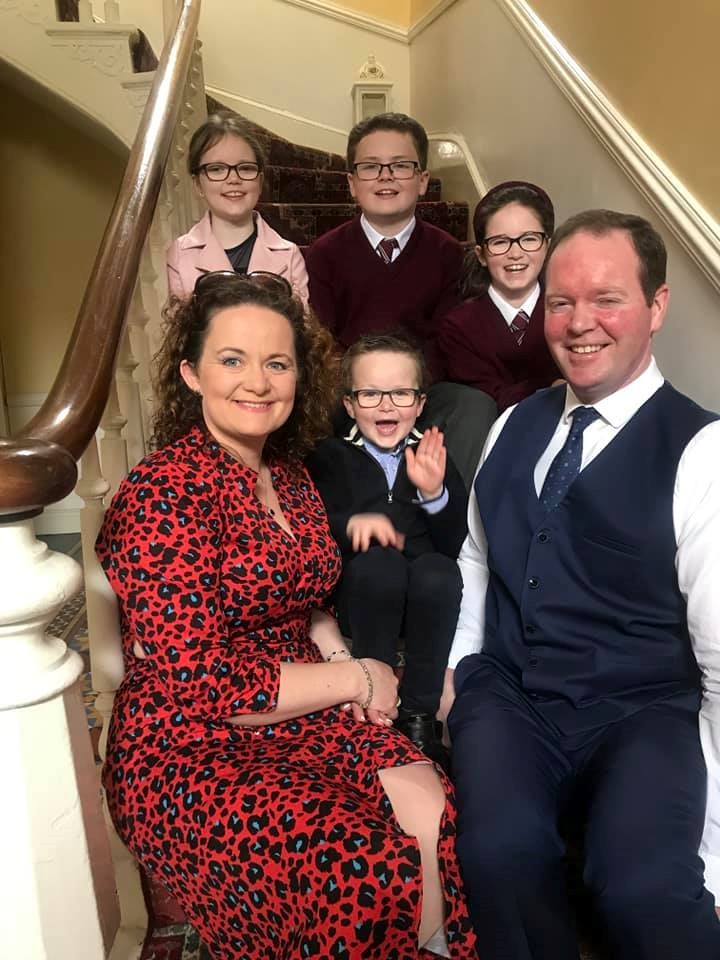 The history of our home and its previous Families.
The house was the former Allied Irish Bank (AIB) which for many years contributed significantly to the commercial life of Bruff. Originally the Munster and Leinster Bank, the first mention we find of it is in 1870 when John Williamson was its manager. He died in 1888 and is buried in Bruff Church of Ireland graveyard. One of his sons was later the Chief Magistrate for Limerick at the time of the War of Independence. Another son, John, served in the Royal British Police in South Africa and died there in 1895 of malaria aged 29 and his third son died at a very young age.
In 1891 the bank was under the management of George De Massey. George died in November 1922 and is also interred in the Church of Ireland graveyard in Bruff.
The early years of the 20th century saw the bank in the hands of John Anthony, a Dubliner who later was transferred to Clonmel.
Circa 1904 Daniel O'Leary was appointed the branch manager. A native of Co. Cork, he, his wife Marie and their three children resided overhead the bank - like their predecessors and their successors in the managerial role. Marie died somewhat prematurely in 1905 and Daniel had to raise his 3 young daughters in addition to discharging his bank managerial duties. He was still here as seen on the 1911 census with a house keeper and a Nursery Nurse listed as residing staff.
In 1958 to 1962 Brain Murphy Father was the bank manager and I had the pleasure of welcoming Brian to our home to stay in July 2015.
A succession of managers followed until the early 1970s – Bartholomew Heffernan, Philip Dunlea, JK Dempsey until George Ambrose was appointed the branch manager.
George was related to Robert Ambrose, the controversial Roman Catholic curate in Bruff during the turbulent early years of the Bruff Agitation or Bruff School Dispute. Unlike his clerical relative, George was extremely well liked by his customers. George was married to Mai and they had 4 children, Joseph, Geraldine, Caroline and Robert. Miriam regularly speaks and swaps pictures with Geraldine who owns a jewellery shop in clonmel.  One of their sons, (Joseph) Joe, was instrumental in the establishment of "The Dawn" which was the famed Bruff historical publication cum parish magazine which began in 1974 and continued until 2000. Joe Ambrose, in addition to being a historian published acclaimed works on several Irish historical figures such as Dan Breen, musical journalist par excellence, contributor to Hot Press magazine, band manager, impresario, short story writer, novelist, contributor to both RTE and BBC radio and television. George Ambrose retired as manager in the late 1980s.
Denis Costello served as manager in the 1990s and circa 1997 Maurice Lyons, his wife Eleanor and their two children lived here for a brief time, Maurice and his wife still live in Bruff and are great community activist to this day. Maurice remained its manager until its closure circa 2000.
In late 2003 a few years after its closure as a bank- the building was purchased by the Sadlier Barry Family and was fully refurbished to replace its original period features and was extended with all of today’s modern conveniences and now enjoys a different life as The Old Bank B&B and the new family live down stairs with their 4 children.